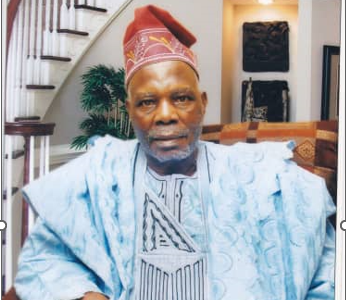 There were several items on the bucket list for my dad, top of which was to visit Jerusalem.

Okay, so that was as much as my elder sister’s wish than his but then, it was a shared wish.

I would have added getting a wife but the last few years of his life gave no illusion as to the possibility of that happening.

My father, Richard Akintuyi, was a man who hardly shed tears. I am reminded of when I saw his first tears and that was after the death of my mother. I had come back from boarding school and was eager to see her.

I had my suspicions, as my aunt and uncle who picked me from school, studiously avoided answering my questions about her.

She was ill the last time I saw her.

But daddy, though devastated by her death, braced himself for the long journey ahead, where he would eventually lived 27 years as a widower.

It was him I grew up with. And the many experiences that define my outlook on life, are related to his dispositions on them.

Growing up, we had a large expanse of land where my father cultivated several crops and fruits. I grew up enjoying fruits in seasons and it would take me to be a 20 years old adult before I could comprehend buying vegetables in the market. We had them all around and possibly daddy made a little extra cash selling to vendors.

However, we didn’t eat alone. We never did. My father ensured that harvested produce were shared among his friends and neighbours. During a fruit in season, say a mango season, his friend would come around to climb the tree and pluck down the matured ones. More often than not, we get 2 sacks that don’t sleep overnight in our house.

They get consumed in the different homes they’ve been sent to. Same with oranges and pawpaws and plantains.

Yet, within this bliss of nature, my father wasn’t spared the ugly sides of the vicissitudes of life.  He had to contend with stagnation in his business, challenges of raising children with different outlooks in life and the pressure of balancing his immediate and extended family needs which were more often than not.

My father was the only child of his father. He grew up with his maternal and paternal grandmothers and embraced his all his cousins as siblings.

Growing up, it was a source of joke that my father called everyone “boda mi”. We asked him one day, how many brothers does he really have and he replied, “as long as they are older than him, he is a “boda”.

That was his disposition to all and that was what endeared him to a lot of people. My dad was an urban legend in stooping to conquer to get what he wanted. When I was denied an admission to study law because of a deficiency in mathematics, my father went north to Jamb head office and got me admissions into three universities, although, two had had their matriculation while he halted on the third as a result of the harrowing experiences students suffered trying to get lectures.

How he did that was a source of mystery but then, I have seen him, countless time, draping himself with the garb of humility while I flinched at the absurdity of it. It would be much later in life before I discovered it as his most potent weapon.

Just like it took some time for a neighour of ours to know my father wasn’t an Edo man. Personally, I grew up saying “vare”long before I knew its ethnic origins. He was that man that could make an Hausa or an Igbo man feel  good in his presence. He had this impulsive need to make people laugh and his appreciation of all, irrespective of tribe or religion, was his joker.

During his last weeks on earth, which was a hospice management, he and my husband would share jokes of how he’s up to the challenge to have sexual intercourse with a woman if he, my husband, would get him a wife. In his barely audible voice but with a gleam in his eyes, my father made sure to give each of his children the attention they deserved.

Raising five children shouldn’t be such a herculean tasks, with the right support, but we proved to be a handful for him. If one wasn’t getting sick periodically, the other had probably compromised on civic instructions, getting into trouble respectively.

Yet despite these daunting challenges, he never found an easy way to relieve himself of the burden. He bore it with as a  matyr and looked forward to when his labours would be ripe enough to eat.

Surely, there is a purpose for everyman. He wanted to do more but he had given himself to his family, his community and the church. If he could, he would do more but I’m convinced he had emptied himself and especially in his last days, had nothing else to give.

We joked that he ought to be a pastor. He was ordained as an elder at Christ Apostolic Mission Church, Idi-oro Mushin, at the same time with the famous gospel singer, Demos Deniran. His love for the church was legendary such that I could understand when the president of the Mission said “So Abike, there will be no more Akintuyi in this church”. What do I say? Maybe in the nearest future. However, that person has a big shoe to step in.

Everywhere he went, the stories are similar- he was a much-loved man. It was difficult to hate him. You could, but you’ll be hard pressed to easily find another person who shared similar sentiments.

His surname was Akintuyi- a warrior worthy of honour. Indeed, he fought death several times. Twice in an accident, he suffered complications of a brain surgery. Despite it, he lived more years with the intent of staying at least for his children. The last weeks simply defined the frailty of life. Every second he lived was a reminder of the choices he made and the life he lived.

Yet in death, I still feel his presence, hovering with a domineering clout. He refuses to go. I see him when someone stops to remind me of a kind deed he did or when they reminisce on the past with him.

I’m much aware of the need to do more than just write about him. Maybe in death, I might fully evolve into Omo baba Richard, if I am am able to imbibe all the kind values he lived by.