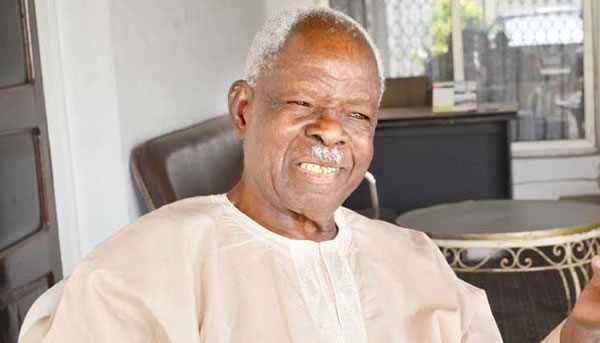 We Are Not Going To Forget All What You Stood For .Yoruba leaders Commend General Adeyinka Adebayo

Yoruba leaders have paid tribute to demise of former military governor of old Western region, General Adeyinka Adebayo, who died in his sleep on Wednesday at age of 89 years.

In a separate interview with The Guild the leaders, they noted that the retired general death is a great loss to Yorubaland and Nigeria as a whole.

In his own reaction, a chieftain of Afenifere, Ayo Adebanjo, said the exit of Iyin Ekiti, Ekiti State, born general is “a big blow for us as a Yoruba race. He was a great general, a great former governor of old Western region who did very well as a military governor. He did very well, not only for Yoruba region but Nigeria as a whole. It is a great loss to the country. May his soul rest in perfect peace.”

Also reacting, a former minister and chieftain of Peoples Democratic Party (PDP), Ebenezer Babatope, said he was a man “so much respected, despite the fact that we are not in the same political camp. He did excellently well as a military governor of the now defunct Western Region. He also a man who believes in the unity of the country. We have lost a great son of Yoruba.”

On his own part, another chieftain of Afenifere, Yinka Odumakin, said a great Iroko tree has fallen and the impart is being felt throughout the thick forest. Yoruba race has lost one of his true sons, great man who work for the progress of the race when he was a military governor of Western Region.

His death is going to be felt across the length and breadth of Yorubaland. Over the years, he had played a prominent role in the unity of Yorubaland. He was a man who always stood on the side of truth. Adieu Papa Adebayo.

A former national vice chairman (West) of the now defunct All Nigerian Peoples Congress (ANPP), and now a chieftain of All Progressive Congress, (APC) Lagos State chapter, Lanre Rasak, said the late Adebayo was a great icon for the Yoruba race who always on the vanguard of race emancipation. We are going to miss him. We are not going to forget all what you stood for our great Papa.