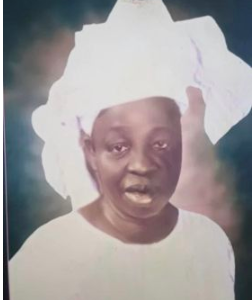 It was the saddest day of my life till date … my immediate step brother Ramoni Rambo had broken the unpalatable news to me while going to work early morning; I made a 360 U-turn back home , and in turns broke the news to my elder brother & senior sister; from there on; crying session had erupted; I added another dimension to my own type of crying

, jumping from the top of chair and down severally in my sitting room; with the forlorn hope that I will wake up from my supposed dream

; the first ever death to be recorded in our Olotu family (except the death of my aged Paternal grandmother – IYA mi Eleko) ; and it happened to no other person, than , the woman acclaimed by family, associates,church community and all , to be a pious woman to such extent her alias “ALADURA” as nicked named submerged every other previous names known with her.

Several Days , Weeks, Months , and few years ; I cannot stopp seeing my mother in my dream

; it was as if half part of my soul & body had gone

; with my beloved wife unable to fill the vacuum

If relatives, friends, associates and community members could qualified my mother with such pious name as ALADURA ; how could we , her blood children and my humble self , the last born could have described her.

My mother was an exemplary sweet mother, kindhearted , caring , unbiased as the senior most wife (Iyale) treated every children from my step Mothers in our polygamous family, equally ; she loved prayers, encouraged us also ; she was an entrepreneur, that went into many business ventures; dealing in gold & jewelleries @ Ago-Iwoye & Mamu Market from there she was first rechristened as Iye-Segun Onigolu ( IYA Segun , the Gold merchant) ; Food canteen & beer parlour @ Igan area of -IYA Eregba/ Onigari house in Olunlenu compound close to Igan Wesley School and later also Yam powder etc @ Ijebu-Ode …..

Like the adage of our elders “ Igi to Dara, Ki pe ninu Igbo” ( the good trees

in the forest usually don’t stay long in the forest ) ; and ultimately; when one get to his or her bus stop in the train

journey of this world; it is inevitable to alight at one’s appointed destination ( bus stop ) irrespective of one’s age.

Many unforgettable memories; when I was kidnapped at toddler and dumped in a pit, far away in the Bush for 3 good days; my mother was said , to have made futile attempt to gulp gallon of gammalin 20; but was overpowered and stopped her attempt to commit suicide ; that was the extent my mother loved me ; she over pampered me to the extreme and loved to call me my known pet name in the family “BAALE” while my father called me “ALASE” just like others in our family.

My mother had overseen some of my noteworthy ceremonies , such as Graduation from the University, Wedding ceremony, naming ceremony of my fist 2 boys before she bided this world goodbye. Coincidentally; her death was exactly 9 years when her mother, my maternal grandmother Comfort Adenuga-Nee Onakoya a.k.a. IYA-Ago was buried (October 20, 1994).

Orisa bi IYA Ko Si ( no god as mother) IYA ni wura iye bi ye ti a Ko le Fowora 2ce ( Mother is such a priceless jewel of inestimable value); Whoever that was privileged to have come across my maternal grandmother ( her picture sitting

on the chair below beside that of my Sweet Mother) while alive in the city of Ijebu ode before relocating to the City of Ago-Iwoye where she became the pioneer Church member of Apostolic Faith Church in Ago-Iwoye until she died in 1994 , would have appreciated the real vessel (womb) that brought my sweet mother to this World.

Rest on my SWEET MOTHER