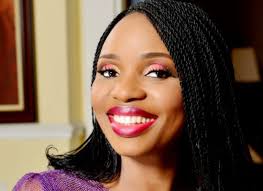 We are standing on all the existing protocols.

At times like this I think about the beginning, we all know the beginning because we have heard it a number of times but I was there.

I was there with my Dad for the ministration but I didn’t see what he saw on the stage because I wasn’t the one looking for a wife.

But I laughed recently because I remembered that my Dad, after the ministration really gently and softly said “Tobi, did you see that woman on the stage that was singing in the choir?” And I said Dad, I am not sure I saw her, he said okay and the rest is history. We know the rest.

When my mum died we wanted a companion for my Dad because I was the youngest, I was fifteen and I was going to College and my Dad was going to be by himself.

All our lives we have known Daddy as a team, we didn’t want him to be alone.

Truly my Dad and Aunty Nomthi were each other’s companions. I didn’t live in Nigeria but each time I came home, it was very interesting to watch how their dynamics was growing and blossoming.

“Mr T. You should have waited for me, I was downstairs with a guest, you should have given me five more minutes”. I would smile and laugh.

They would tease each other, she always teased my Dad for being a home buddy because my Dad thought the best place you can have quality time is at home, no need to go out. Aunty Nomthi wanted to go out.

Although my Dad was a romantic man, Aunty Nomthi wanted a bit more so she was always teasing him about it. My Dad listened because after that time he was always asking Kemi or myself about how to surprise Aunty Nomthi on Valentine’s Day.

Aunty Nomthi would call me on FaceTime and say “see what Mr. T bought me”. She would show me flowers and I would say that’s my Daddy. Even when she was in London before she knew she needed something, my Dad would have called me and told me “Tobi please I need you to go and meet Pastor Nomthi and do this and that”.

Even after I had done it, my Dad will be thanking me “Thank you so much Tobi” because he loved her so much and she loved him and it was very evident for everyone that saw them.

I want to say to Tim Tim and Jom Jom, that your Mum loved you so much. She celebrated every one of your milestones, all your achievements. I knew when Tim Tim became a prefect, oh Aunty Nomthi was so excited.

Your Mom loved you so much and she talked about you all the time. She celebrated us too; my sister, my brother and myself.

When we came back for my wedding in September nobody knew what was going on. Pastor Nomthi was still having treatments at the time. At the time, there was this song that was reigning Jerusalema and though I am young, I am finding it hard to keep up with all the dances now and we were talking about the song and she said “do you know it’s actually a Christian song?” and I was like “Wow, I didn’t know that”. And then she started to show me the dance steps and we were just joking.

When I danced in on my wedding day, Aunty Lara and Pastor Nomthi were in front and as I was dancing I looked at Aunty Nomthi and she signaled to me “Tobi, do the motion of the dance we learnt”. She was so happy, if you look at my wedding pictures all you will see is Aunty Nomthi and myself dancing because that was who she was.

As a family from myself, Tolu and Jimmie, Aunty Nomthi we love you and thank you for the amazing twelve years that you had with my dad. We loved to see the smile on my Dad’s face, we weren’t so worried about my Dad when Aunty Nomthi was around.