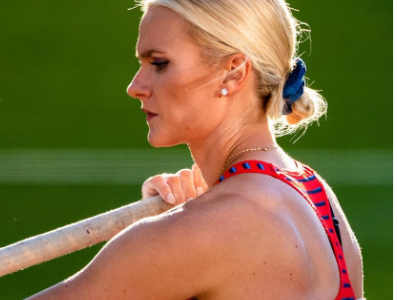 Olympian, Kate Nageotte, Immortalises Father With This Act Before Her Games

Katie Nageotte is an Olympic Champion ,World Champion NIKE Pole Vaulter athlete who has a fascinating feature to her performances.

Moments before she pole vaults, she always hit one of her shoes. In a pinned message on her twitter, Katie says

“For my entire career, since he passed away, I’ve written “Dad” on the inside of my spike and I tap it before big jumps. This is the first picture I’ve ever received with me doing it, and the fact that it’s in a Team USA uniform makes it that much more special”.

This is said to be done to immortalise her father. After her father’s death, she’s been writing “Dad” on her shoes.

In  an interview with Cleveland.com., she’s quoted:

“He was my biggest supporter,” she shared. “In every sport, he would take me to practices or camps or clinics. He knew I was athletic, and he said, ‘If you’re going to do something, I want you to be really good at it.’ He would pay extra for private lessons, things like that.”

According to her, her father was a great inspiration to her during her games. ‘When I do tap my spikes, I think ‘alright, let’s go, dad. Let’s do it’.