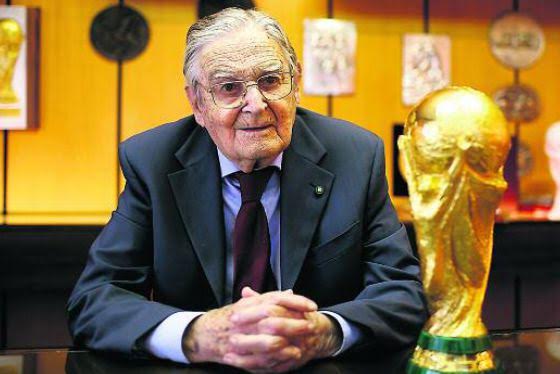 Silvio Gazzaniga, creator of the FIFA World Cup™ Trophy, passed away today in his home city of Milan at the age of 95. “It’s with great sadness that I learned of the death of Silvio Gazzaniga,” FIFA President Gianni Infantino said. “He was the creator of a trophy, which is the most beautiful emblem that FIFA could dream of having as a prize. The World Cup is a mythic object for the players and for all football lovers. We will be eternally grateful, I express my condolences by joining the pain of the family.”

After Brazil were allowed to keep the Jules Rimet trophy in 1970 following their third World Cup triumph, a new prize was needed for the most prestigious tournament in global football. FIFA received 53 proposals from seven different countries for a new trophy, before opting for Gazzaniga’s design. Silvio Gazzaniga “The lines spring out from the base, rising in spirals, stretching out to receive the world,” said the artist of his work, an 18-carat solid gold trophy weighing approximately six kilograms.

“From the remarkable dynamic tensions of the compact body of the sculpture rise the figures of two athletes at the stirring moment of victory.” The first country to lift the new trophy aloft was Germany FR at the 1974 edition on home soil. As an Italian, Gazzaniga remembered particularly keenly his homeland winning the trophy he had made in 1982: “There were countless people rejoicing in the streets. It looked like they’d gone mad.” Unlike the Jules Rimet trophy, the original FIFA World Cup Trophy remains permanently in FIFA’s possession, with the winners awarded a replica. “A work of art is a bit like one’s child, as it’s a creation,” said Gazzaniga, who primarily designed medals and trophies as an artist, in an interview once. “And I’m not just talking about the World Cup: the same is true for everything I did.”

His legacy will continue to live on for many more years as a prize for the most successful football players on the planet.