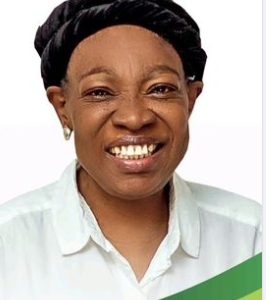 She Was Also A Scholar In Her Fields Of Specialty – Anatomy and Radiology- DR. ALABA ISOBO UDOAKA

Alaba Isobo Udoaka was born in Port Harcourt on October 21st 1965, the fourth and last daughter of a family of seven. Her father, Ernest Francis Agbani Briggs was the grandson of Daibisrama, the first adopted son of Chief Iniikeiroari Young Briggs of Abonnema.

Both parents of blessed memories, were of Kalabari extraction, in the Niger Delta area of Rivers State. They were renowned educators and mentors who contributed immensely to the educational development of their communities as well as the State.

They named her Alaba – a daughter of royalty – to symbolize her noble heritage.

Alaba attended elementary school as any other child of her age, but her difference soon showed up. In her six years spent at this level, Alaba zipped through with a record yet to be beat at the St. Michael’s Primary School, Buguma, Rivers State, by being at the top of her class in every single examination.

She graduated from Federal Government College, Port Harcourt in 1981, as the best graduating student, winning almost all the academic awards and proceeded to University of Lagos to study Medicine.

Isobo later transferred to University of Calabar to finish her MBBCh degree, in 1994. In between she bagged a Bachelor of Science degree in Anatomy in 1991. It was at UniCal that she met her future husband, Ekpedeme Udoaka, who was also a medical student.

They were attached to each other, daily swapping medical hypotheses and both delighting in ‘serving the Lord’ until death tore her away from him.

Dr. Udoaka was the consummate professional. She was not just a physician, but she was also a scholar in her fields of specialty – Anatomy and Radiology.

Her colleagues and students can attest to the fact that she was a dedicated lecturer and administrator who rose through the academic channels to be elected an Associate Dean of the Faculty at University of Port Harcourt and was an Associate Professor.

Even as she struggled in ill health she bravely and resolutely prepared to be screened and interviewed to be a full professor, a position she had become qualified for over five years ago.

Despite her weakening health, Alaba continued to take on her responsibility of supervision and advise of the countless M.Sc., Ph.D. and medical students, always concerned about their dedication, discipline, diligence and progress.

She was also an active member and at some point even an officer of the following professional associations, Nigerian Medical Association, (NMA), Medical Women Association of Nigeria, (MWAN), and the Anatomical Society of Nigeria.

A Google search on Alaba Isobo Udoaka will show a list of the scholarly papers she wrote, research she conducted, academic books she published and medical conferences she participated in and contributed to.

An erudite scholar, she most certainly was.As for her patients, she was their darling and sweet doctor. Even people who did not need radiological services saw her as their primary physician, and she did not disappoint them.

From Kano, to Port Harcourt, to Calabar, to Uyo and points in between, Dr. Alaba made her mark among her numerous patients, in the hospitals, clinics or at home, sometimes in church, but also in remote and rural communities wherever there was a need.

Alaba was exceptional at giving of what she had and in this case, one would call it medical philanthropy. She started the medical intervention program of the O. B. Lulu-Briggs Foundation in 2005 as the Medical Director, and under her supervision and direct involvement, the Foundation has carried out over thirty, 5-day Free Medical Missions across the towns and villages of the Niger Delta treating over 130,000 patients.

Indeed she excelled by venturing beyond the parameters of her academic discipline. She was not just a doctor, an academic, or an administrator, but was also an astute businesswoman.

She not only established and ran her own private medical clinics where she practiced her craft, she also ventured into other endeavours not remotely related to Medicine. Alaba founded the Green Pears School which quickly became one of the most sought-after primary schools in Uyo.

It easily gained accreditation, and always has a long wait list of potential students. Her entrepreneurial spirit, which she must have inherited from her mother, did not stop there; she set up the La Sein Events Center where all Uyo used to celebrate themselves on occasions such as weddings, church events, etc.

When the COVID-19 pandemic hit and public festivities came to a grinding halt, Alaba, in the manner of great entrepreneurs, converted the premises into a water depot, distributing bottled water, both wholesale and retail.

Earlier, as a student and as a Resident, she engaged in various small-scale businesses such as trading in imported suits and other merchandise, running a poultry and a plantain farm.

While trailblazing her way through Medicine and Business, Alaba never forgot or neglected her most important accomplishments in life, being a wife and a mother.

She found her soul mate, Ekpedeme, in medical school, married him in 1994 and together, they raised a wonderful family with their kids Talatu Iganibo, Eric Udoaka, Ima Anita Udoaka and Daniel Udoaka- all graduates, except for the youngest one who is in the University.

Alaba took exceptional pride in her husband and children and dedicated a lot of her time and effort to not just raising them right but also spending as much time with them as possible to love and guide them both spiritually and in every other way even though she attributed their success to the Grace of God.

To Alaba, God always comes first in everything. She had an amazing faith in her Lord, and held tenaciously unto him until her very last breath. Alaba believed with all her heart that people should rejoice and be glad and give thanks to God in all circumstances (1 Thessalonians, 5:16-18).

Translating their faith into action, she and her beloved husband ran a church in Uyo under the aegis of the Redeemed Christian Church of God. For the past 25 years, they worked as partners in raising worshipers from modest congregations into established congregations.

He was the Pastor, she, one of the Deacons; and together, they were actively involved in evangelism, visiting many remote villages and preaching the Gospel in Rivers, Cross River and Akwa Ibom States. Pastor and Deacon Udoaka never missed any religious ceremonies at the RCCG Redemption Camp in Ogun State.

And at home, they participated in the other services of RCCG offered on television.How did this woman of great faith and accomplishments interact with people in her short but impressive life?

To her immediate family, especially her older sisters, Alaba was the ultimate sister; always there when you need her. There was such an indelible bond that tied them together based on a childhood lesson of being each other’s keeper.

Even when they lived on different continents, they kept in touch constantly and lovingly took care of one another.In the same vein, her relationship with her husband’s family was exemplary.

She was totally loved as one of theirs and she loved too. In her illness, a few of her in-laws went as far as volunteering to donate organs for her. To immerse further into her husband’s culture, she engaged a tutor to teach her, her husband’s dialect-Anang.

She was a delight with them, not just the immediate family but across the communities. At different times, over the years, she initiated, funded and carried out medical outreaches in their village and the surrounding villages.

Despite being as ill as she was, during the pandemic lockdown, she continuously sent palliatives to the women in the communities. She truly lived for others, was hardly offended and never held any grudges.To the people who work with her, Alaba was very diligent in carrying out her responsibilities and never shirked from her duties.

She was very personable but strict, demanded (and gave) excellence in every sphere in life, and did not suffer fools. She was so organized that she got the playful nickname, “Madam Earmark,” because when once she set her mind to something, she would move heaven and earth to get it done, no procrastination!

Alaba did not compromise on important issues, knew what she wanted and went for it. But above all, she was fair. Being a Christian, she lived an exemplary life, worthy of a child of God.Alaba Isobo Udoaka was one of a kind as a wife, mother, sister, aunty, in-law, niece, cousin, daughter, friend, colleague, and boss.

A physician, scholar, teacher, and businesswoman. She was all of these and more and will be missed thoroughly. But most of all, she is now happily nestled in her Father’s arms.