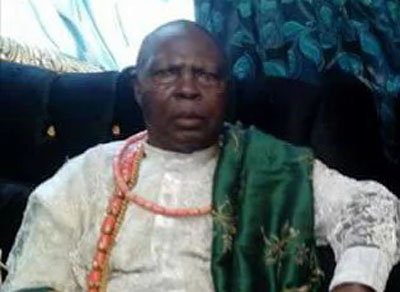 Ekpemupolo, 84, died on Wednesday morning at a private clinic in Warri, where he had been receiving treatment for injuries he sustained in one  of his legs after his home was  allegedly invaded by soldiers in May, this year.

Tompolo father’s personal residence at Kurutie community in Warri South-West Local Government Area of Delta State was in May raided by military personnel from the Joint Task Force, who were in search of his son, Tompolo.

He was said to have sustained injuries during the attack, leading to one of his legs being amputated.

Spokesperson for Tompolo, Paul Bebenimibo, confirmed the development when contacted on the telephone by our correspondent.

He told our correspondent that the father of the Gbaramatu strongman died from injuries sustained during the military expeditions into his community in Gbaramatu kingdom in the early hours of May 29, 2016.

While referring to an earlier statement the junior Ekpemupolo had issued, Bebenimibo said the family would officially issue a statement on the development.

The spokesman for the Ijaw Youth Council, Eric Omare, also confirmed the death of Tompolo’s  father. IYC described the passage as very regrettable.

A statement later released by the IYC, the umbrella body of Ijaw youths, said, “The IYC received with shock the demise of Chief Ekpemupolo, the father of Chief Government Ekpemupolo in the early hours of Wednesday, September 7, 2016, in Warri, Delta State.

“The death is unfortunate and painful especially considering the fact that he died from the injuries he sustained while running from military rampage on Kurutie community, Gbaramatu Kingdom, early this year.

“The IYC sympathise with the Ekpemupolo family, the Gbaramatu Kingdom and the Ijaw nation on this untimely death!”