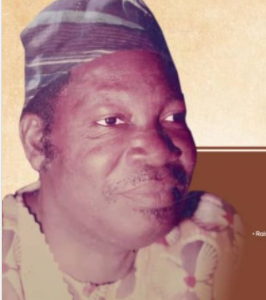 I took hold of his leg, in the midst of the confusion and shouts, trying to shake him awake. Because I was certain that even if he did not respond to the voice of others, he would definitely respond to mine.

I was his baby. His pet. The full custodian of all his mumu buttons. The one would could say anything to him while others cowed.

Tokunbo Olaite Popoola, known to his friends as TOP Baba, was an exceptionally brilliant man.

Though with a late start in life due to family challenges, his unquenching thirst for knowledge stood him out. Against all odds, he personally funded his education, aided in large part by his love for reading.

That love, I inherited from him. By Primary 5, I had read all Enid Blyton books as well as his collection of Readers Digest.

He wrote so well, he got the attention of then Lagos State Governor, Lateef Jakande, who upon interacting with my dad wondered why such a brilliant chap lived in the largely undeveloped area of Mushin.

So, Lateef Jakande settled him in Ikoyi, with a government allocation house just off the popular Kingsway Road.

I lived there for the first 17 years of my life.

A Jornalism major from the department of Mass Communications, University of Lagos; and a full Ijebu-Ode indigene from Irewon Quarters, my father devoted his life to service at the Federal Radio Corporation of Nigeria.

Usually the oldest amongst his friends, I do recall his colleagues, protégées and mentees coming by the house to borrow from his really extensive library.

Such a glowing legacy, a prolific character, and undeniable son of the Yoruba soil, my father was a man many were privileged to know.

Today, my sisters and I celebrate the life he lived and the path he laid before us. In his memory, we launch the TOP Foundation to:

Lofty ideals, but definitely attainable. After all, we inherited the blueprint of achieving the impossible from our dad, the doer himself.