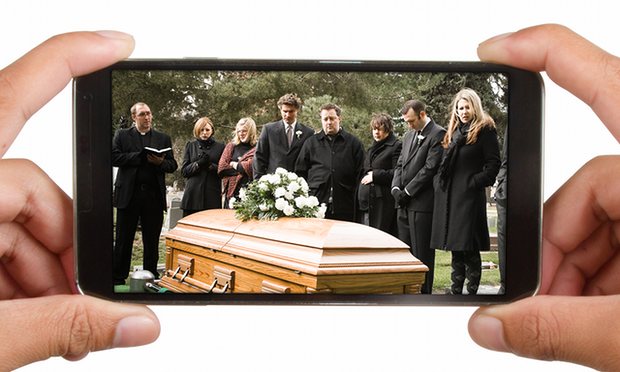 Live-streamed Funerals: The Rise Of The Virtual Mourner

Physically attending a burial ceremony is usually the standard way of paying the last respect to the departed one and honouring the family. If however, circumstances beyond control warrants you not to be physically present, would you prefer if the event was live streamed. In this incisive article by Tim Dowling of The Guardian, he looks at the rise of live streaming at funerals and wonders if it can keep up with the sincere condolences and empathy attending a funeral can generate.

There aren’t many aspects of life that don’t have an online alternative – and these days that includes death.

An increasing number of funerals in the UK are now live streamed for the benefit of far-flung mourners. Anyone unable to make it to the crematorium on the day can simply log in and watch from home, or from anywhere with an internet connection.

But the webcast funeral is not as newfangled as it might sound. HD Tribe in West Sussex, for example, has offered live streaming for nine years, and funeral director Max Webber estimates that between a quarter and a third of all their services make use if it. “We have a camera at the back of our chapel, which we turn on,” he says. “It’s always done at the request of the family.” HD Tribe doesn’t charge extra for live streaming, although some places do. At Southampton crematorium it costs £50. Llanelli crematorium charges £80 for a webcast, plus £65 for a DVD.

Mourners who wish to watch the webcast are given login details and a password to safeguard privacy, and the funeral service is otherwise unaffected by filming. “We obviously let the minister know,” says Webber. “Some of the ministers get the family to turn and wave to the camera.”

The rise of the live-streamed funeral has generated a certain amount of worry over potential negative consequences. Paul Allcock, president of the Society of Allied and Independent Funeral Directors, said streaming is “wonderful for those relatives who live abroad, but there’s also a danger of pandering to people’s laziness and not attending personally and sharing your condolences, which is such an important part of the grieving process”.

But, in Webber’s experience, most mourners would rather be there in person if they can. “I don’t think it’s actually dissuading anyone from attending,” he says.

The live stream is generally a one-way feed – virtual mourners needn’t dress up – but the technology for a more interactive experience certainly exists. “I’ve only ever had it done once,” says Webber. “A family brought in a laptop of their own, and they skyped family in Australia. We were happy to help with that.”

Technology, of course, is also the main limitation of a web funeral. Live feeds can succumb to all sorts of technical hitches that might be very distressing in the circumstances. It’s sad enough when a football match cuts out at a key moment. Even HD Tribes’ website warns that it is a Windows Media-based service, incompatible with Apple devices. Is that still true?

“The engineer was here on Friday,” says Webber. He’s not promising anything yet, but if multi-platform testing goes well, you’ll be able to watch funerals on your iPhone by the end of the week.