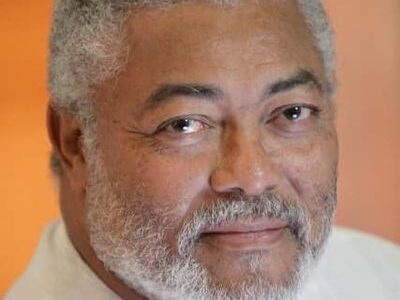 Another great has fallen.

Former President of Ghana.The one who showed us alongside Patrice Lumumba, Leopold Sengor, Ahmed Ben Bella, Captain Thomas Sankara, Samora Machel, Nelson Mandela what it means to be a true African revolutionary.

An Apostle of the Sankarian School of Thought.Africa for Africa.He said on different occasions.“Food is a political weapon… Africa’s foremost defense is self-sufficiency in food. Until we attain a substantial measure of freedom from food dependency, we are vulnerable to manipulation by the wealthier nations.”

“The test of religious belief is not in pious platitudes and cautious charity, but in positive and creative action.”“Democracy is not realized merely by having a machinery for registering voters and getting them to vote every four years, but also by there being a machinery for identifying the needs of those voters in between the election periods, and monitoring the realization of those needs.”“People with conscience are sometimes appalled by the extreme insensitivity displayed by some political appointees.

The unprecedented levels of corruption, offensive show of power and opulence by some at a time when our country requires prudence and frugality is something that I call on President Mahama and his vice to set their eyes on”

He was the builder of the modern state of Ghana. A soldier turned democrat. Head of state turned President. Who was loved by his people. Who stood solidly for the emancipation of Ghanaians and Africans from the shacklehood of poverty, neo-colonialism and crass materialism.

Felled by a brief bout of ill health. At the age of 73. But will live forever in our hearts and minds .As a true African hero.Imperfections notwithstanding. We carry the torch.He received and has passed on to us.Into the future .And as Sankara would ask.”Our motherland or death?”And we would respond.”We shall overcame.”It is so we tell him.

As he journeys through the light to that peaceful shore. You have played your part. We who you left behind.Will plays ours. And those who will come after us Will also play theirs.At the end of which. Africa will be great again.

We believe without doubt. That come what may. Even though the clouds are pregnant with doubt, fear, disillusionment and despair. A better dawn awaits us all. In our motherland Africa. Uhuru is coming