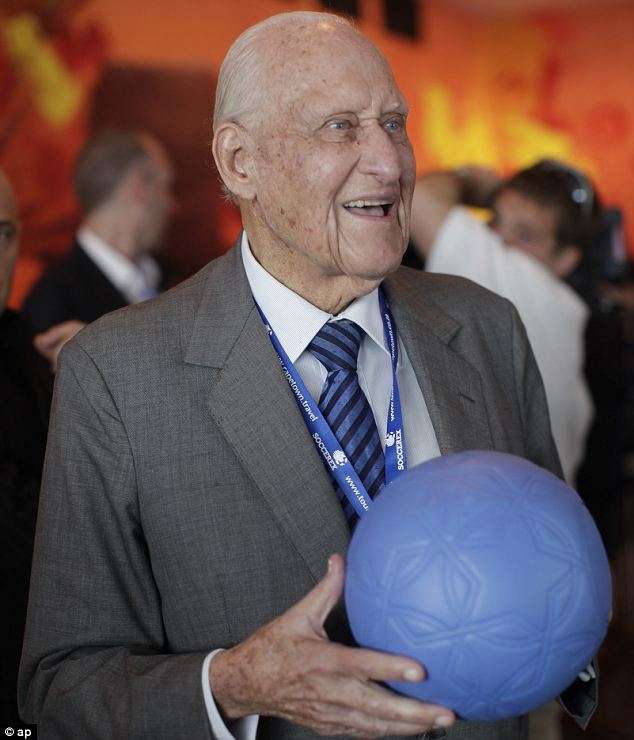 Joao Havelange Bows Out At 100

Tributes are pouring in for former Fifa President, Joao Havelange, who has been announced dead according to multiple sources.

Former England Captain, Gary Lineker, has said of him ” Joao Havelange, the former Fifa President has died. Football gave him so much. Yes, you heard that correctly”.

Havelange came across most people as a man of imposing figure and an astute politician, which many credited as his talisman in retaining the FIFA presidency which he got in 1974 and presided over for 28 years before handover to Sepp Blatter in 1998.

He was also a sportsman representing Brazil in the swimming competition of the 1936 Olympics. He won a bronze medal for water polo at the Pan American Games in 1951, and also represented Brazil again in the sport at the 1952 Helsinki Games.

It is undeniable that Havelange was instrumental to the revolution of football. He was quoted ”I have come to change entirely the way FIFA works. I have come to sell a product called football”, when he was elected as president of FIFA. And upon his exit before handing over to Sepp Blatter , he said ” I did not become the president of FIFA just to watch good football and applaud”.

Born to Belgian parents in Rio de Janeiro in May 8 1916, Jean-Marie Faustin Godefroid de Havelange went on to have a degree in law but embraced sports administration with a passion and this made him to lead the Brazilian delegation to the Melbourne Olympics  in 1956, subsequently becoming a member of the international Olympic Committee (IOC) in 1963. The year 1958 was a defining moment for him as the year he was appointed head of the CBD, the Brazilian Sports Confederation.

These administrative traits prompted former US Secretary, Henry Kissinger, to describe him as a man ” who sees the world through a telescope and not through a microscope”.

As a sports administrator , he rose through ranks to the top echelons of sports bodies, dignifying and uplifting the standard of  the games especially through internalization of football. It was in his time that the World Cup expanded from 16 to 32 teams. As president, he organised six world cups from 1974 to 1988.

FIFA President, Gianni Infantino, celebrated the Centenarian saying ”the whole football community should be grateful for his contribution. During his 24 years as FIFA president, football became truly global, reaching new territories and bringing the games to all corners of the world”.

Havelange was a sports enthusiast

Havelange was the first non-European head of FIFA and its longest serving president, visiting virtually all the major sport playing countries in the world. He transformed FIFA which he met with modest staff strength and meagre income and left it with over $4 billion in its treasury and transformed the game to a $250billion a year international industry.

‘Rest in peace, Joao. Football, your passion, my mission, is in good shape. You should be proud”, says Blatter. He further said ”Thanks to Joao Havelange, football is the world’s leading sport- not only from a social, cultural and economic perspectives, but also in terms of political impact”.

Havelange is survived by his wife, daughter , two grandsons and a granddaughter.