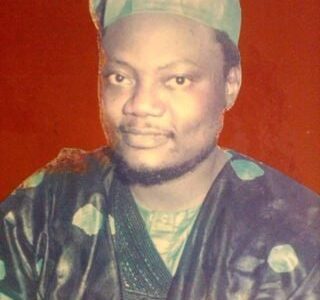 On this day , thirty years ago we went to church with our cousins who lived on the same street with us. We didn’t go in our parents car because my Dad was sick and my Mum stayed back home to take care of him.

I remember everyone in Sunday school kept asking me about my Mum. My Mum was a children’s teacher in our church. Our Church was situated in Oshodi and we lived in Egbe, then it was a about 45mins drive. Now with the traffic situation it is over one hour.

On our way home, we were in Isolo when we heard a shout. As I heard that shout, I told my sister and my cousins that that was my “Iya Alagbo’s “ voice. They all laughed telling me there was no way “iya Alagbo” will shout from our house and we would hear her shout in Isolo.“Iya Alagbo” was my father’s immediate elder sister and she was close to him.

Since forever, She and my “Iya Elewedu” the eldest sister would spend every Sunday with us without fail. Iya Elewedu was the first born of our grandmother, Iya Alagbo was the third born, while my Daddy was the fourth born. Of my grandmother’s kids, they were the three living in Lagos so they were close.

We got home and pandemonium broke. I saw a lot of people in front of our house with different poses of sorrow. As my Daddy’s uncle packed the car, we all got down and I heard our driver who lived close to us say “, Daddy he don die” My sister and my cousins seemed to be crying but I was too young to grasp what death was.

All I knew was as I entered our compound, I seemed to be more confused. I saw my uncle who stayed with us holding a Pestle and shouting to the heavens with tears in his eyes. I saw my Iya Alagbo on the floor screaming like crazy (I still think it was her voice I heard from Isolo). I was scared and kept asking for my Mummy, but I was not allowed to see her, I guess she must have fainted or something. I almost wanted to ask if there was a film being recorded in our house. It was so surreal; I had never seen anything like that before.

It took me a while to understand but I later got to know I would never see my daddy again and that hurt me. I was angry at my Daddy. I wondered if it was because I was a naughty girl that he had to leave. I remember seeing his dead body and struggling to get away. I was crying and insisting I don’t want to see him.

After he died, I couldn’t brink myself to look at any dead body until 10 years later. Seeing his body traumatised me for years and made my skin crawl whenever there is a lying in state. It was a sad time for us but somehow, we overcame. We grew as a family and we had each other. Its been thirty years without my earthly father but every year that passed I keep thanking God for him. He lived just for forty years but today we still benefit from the time he was here.

Psalm 68: 5 A father to the fatherless, a defender of widows, is God in his holy dwelling. Isaiah 54:4-5 “Fear not, for you will not be ashamed; be not confounded, for you will not be disgraced; for you will forget the shame of your youth, and the reproach of your widowhood you will remember no more. For your Maker is your husband, the LORD of hosts is his name; and the Holy One of Israel is your Redeemer, the God of the whole earth he is called.