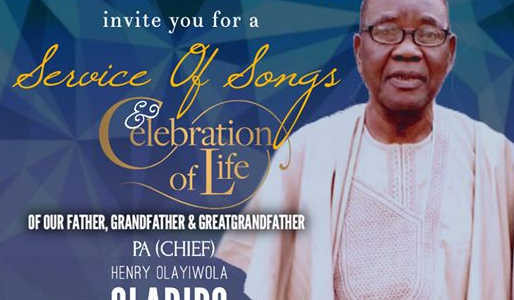 Ibadan, the capital of Oyo State, recently played host to a cross section of guests, friends and families at the interment of a very dear father, grandfather, and great father, Pa Henry Olayiwola Oladipo.

The event, which was a colourful one saw the children all assembled in bright blue and red attires. Among the children of Pa Olayiwola Oladipo is Hector Oladipo, a consultant at Trinity Maternity Centre, Bucknor, Jakande Estate, Oke- Afa, Isolo, Lagos.

Cross Section of family members at the church service

Pa Olayiwola has been described by his children, such as Tim Oladipo, as a God fearing and highly principled man who loved righteousness and eschewed evil. This he made known at the service of songs for his father which took place in London.

Pa Oladipo was a successful family man and his wife Christiana Toluwalase, also runs a ministry in Christ Apostolic Church, which has seen many appreciate the grace and gift of God in her life.

The burial ceremony was an opportunity for Pa Oladipo’s children to pay their last respects to him in a grand manner. From the church service, which was a beautiful choreography of soul inspiring music, bible readings, tributes and presentations, there was no doubt that the journey of Pa Oladipo was a testimony of the good life he lived on earth.

The reception party was also a symbol of love shown to Pa Oladipo’s family. As stated by Hector Oladipo, the event was an opportunity for his patients to show their appreciation for all he has done for them. They all came from far and near to honour the man who has a heart of gold and is ever ready to go above and beyond in the discharge of his duties.

Pa Oladipo will surely be remembered by all who had contact him and especially be his children. According to Hector Oladipo, His father remains alive to him. “His words, counsel, encouragement and support for me all through these years will always be an integral part of my life. I know it is hard to say goodbye but I am glad he is in a better place now”.

Liveonmemories wishes the entire Oladipo family congratulations on the successful burial ceremony of Pa Oladipo and pray that his memories remain immortalised in the hearts of all those who love him dearly.