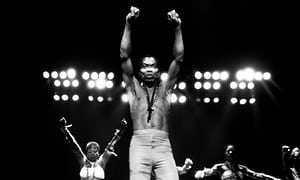 Fela Says, When The Higher Forces Give You The Gift Of Music, It Must Be Well Used For Humanity

On August 2, 1997, Fela Anikulapo Kuti, who had been dubbed one of Nigeria’s greatest artiste bade the world farewell. He left behind a rich collection of artistic materials which today, ensures that his legacy will forever be inscribed in the hearts of his family and fans.

Today marks the 20th year of his demise and in remembrance of him, we bring to you some of his famous quotes as compiled by Nairaland

1. “My name is Fela Anikulapo-Kuti. Black president or Chief Priest of Shrine.”

Fela’s introduction of himself.

2. “I must identify myself with Africa. Then I will have an identity.”

How he came up with Afro-beat.

3. “With my music, I create change…I am using my music as a weapon.”

Fela’s thoughts on his music.

A conversation between Fela and the police officer who ‘checked’ him in at Alagbon Close police station, the very first time Fela was arrested.

5. “A radical is he who has no sense…fights without reason…I have a reason. I am authentic. Yes, that’s what I am.”

His response to the question; would you call yourself a radical?

6. “You no go do so again, you no go come back again, inside barracks you go dey…you go dey where you belong.”

His ‘dream’ that the military, deter from seizing political power.

9. “Bleaching of the body to look lighter is immoral.”

Asserting his views on skin lightening.

10. “After all, the military do not just dance to my music, they march to it too.”

Fela’s sarcasm on a possible reason for the love-hate relationship between the Nigerian military and himself. 13. “All the problems for this world,na him we carry for head for Africa”
(In Teacher no teach me nonsense)

14. To be spiritual is not by praying and going to church. Spiritualism is the understanding of the universe so that it can be a better place to live in.”

Fela’s explanation on one of his anti-Christian views. 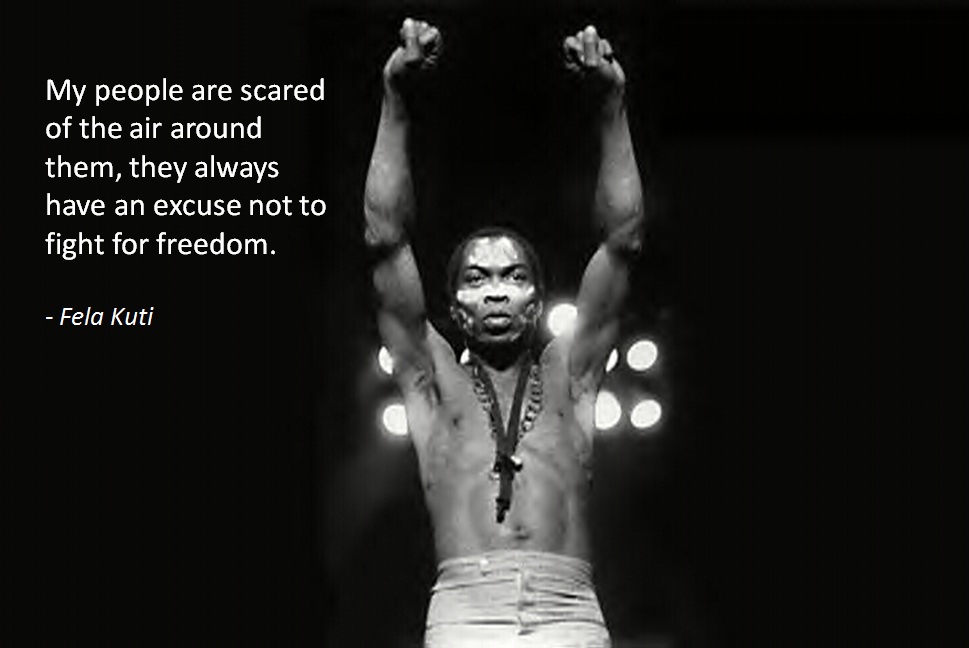 Fela’s views on why he likes having ‘unlimited access’ when it comes to sexual intercourse.

16. “…When I was first put in jail, the name of my prison cell was ‘Kalakuta’, and Republic? I wanted to identify myself with someone who didn’t agree with the Federal Republic of Nigeria…I was in non-agreement.”

Fela, on how he came up with the name; Kalakuta Republic, for his abode.

17. “I want peace. Happiness. Not only for myself. For everybody.”

One of his life ambitions.

Fela’s reply to the question; Do you want to leave an imprint on the world?

In response to being asked if he has any regrets.

20. “…man is here against his will. Where do we come from? What was before us?…when you think you die, you’re not dead. Its a transition.”

Fela being philosophical on life and death.

21. “…just want to do my part and leave…Not for what they’re going to remember you for, but for what you believe in as a man.”

Fela’s response on what he would like to be remembered for.