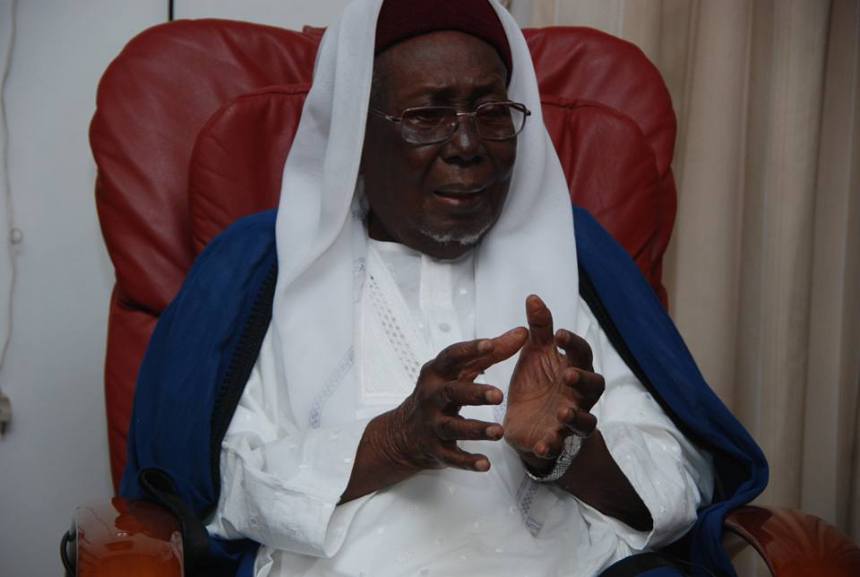 Eulogies Pour Out For The 18th Sultan Of Sokoto, Alhaji Ibrahim Dasuki

Danbaba, who is also the Magajin Garin Sokoto, was reacting to the death of Dasuki on Monday, November 14 night at an Abuja hospital at the age of 93 after a protracted illness.

According to Danbaba, “The late Dasuki was a peace lover and a peace maker in Nigeria and beyond.

“He had worked meritoriously to ensure national development and cohesion. His death is a great loss not only to his family, Sokoto State, but Nigeria as a whole.”

In his reaction, the former Governor of Sokoto State, Sen. Aliyu Wamakko (APC-Sokoto), described Dasuki as, ”a gentleman who lived a life of total service to humanity.“He was a man of God and a man of Peace,” Wamakko, who represents Sokoto Central Senatorial District, added.

Another Senior Counselor in the Sultanate and Galadiman Gari, Alhaji Aliyu Attahiru, said the death of Dasuki was a great loss to his family, the Muslim Ummah and the entire nation.

The Secretary of the Sultanate, Alhaji Umar Faruk, who confirmed the death of the former Sultan in a statement, said that, the remains of Dasuki would be buried in Sokoto after the afternoon prayer (Zuhr) on Tuesday.

After finishing high school in 1943, he worked as a clerk in the treasury office of the Sokoto Native Authority as it was the tradition in Northern Nigeria for grant recipients to work for their sponsors, their respective Native Authorities. He however, in 1945, took up appointment with Gaskiya Corporation, a publishing house that published the Hausa daily called Gaskiya Ta Fi Kwabo. In 1953, heeding the call by Ahmadu Bello for Northern Nigeria citizens to take up appointment in the regional civil service, Alhaji Ibrahim Dasuki joined the service as an executive officer. A year after he became private secretary to Ahmadu Bello.

In 1957, he filled the position of regional executive council deputy secretary and a year later was sent to Jeddah, Saudi Arabia, as Nigeria’s pilgrimage officer. Between 1960 and 1961, he worked in the Nigerian Embassy in Khartoum, Sudan and was later brought back to Nigeria by Ahmadu Bello to work as resident in Jos, from where he moved on to become the permanent secretary in the regional Ministry of Local Government. Dasuki later switched to the Ministry of Commerce in 1965 as its permanent secretary. From 1965 until he was crowned Sultan, Dasuki concentrated largely on his business activities.

In 1966, he was chairman of the influential Northern Nigeria Produce Marketing Board, anorganisation involved with marketing the export of groundnut and in the distribution of seeds and chemicals. From 1967 to 1977, he was director and later chairman of the Nigerian Railway Corporation (NRC). From 1979 to 1989, he was co-founder and chairman of the Nigerian branch of BCCI and was also a partner of Nessim Gaon in APROFIM, the firm involved in infrastructure investments, commodity production, purchasing and export activities.

After the death of Abubakar Siddique, the 17th Sultan of Sokoto on November 1, 1988 he became the 18th Sultan of Sokoto but was deposed in 1996 by General Sani Abacha through the military administrator of Sokoto State, Col. Yakubu Muazu, for reason among others such as causing enmity among the people and among the royal family. He was immediately flown to Yola and then taken to Jalingo where he was placed on exile.

The late Sultan was influential in the founding of Jama’atul Nasril Islam.

Culled from: punchng.com with additional reports from www.vanguardngr.com