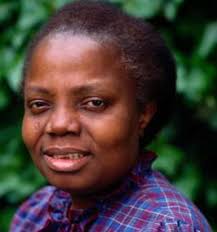 All You Need To Know About Renowned African Literary Matriarch, Buchi Emecheta

Buchi was a Nigerian novelist, based in Britain since 1960, the year of Nigeria’s independence.  She has written plays and autobiographies, as well as for children. She was the author of more than 20 books, including Second-Class Citizen (1974), The Bride Price (1976), The Slave Girl (1977) and The Joys of Motherhood (1979).

Her themes of child slavery, motherhood, female independence and freedom through education won her considerable critical acclaim and honors, including the revered British title, OBE-an Order of the British Empire in 2005.

Emecheta was born in Lagos, to Igbo parents, Alice (Okwuekwuhe) Emecheta and Jeremy Nwabudinke, both parents from Ibusa, Delta State, Nigeria. Her father was a railway worker in the 1940s. Due to the gender bias of the time, the young Buchi Emecheta was initially kept at home while her younger brother was sent to school; but after persuading her parents to consider the benefits of her education, she spent her early childhood at an all-girl’s missionary school. Her father died when she was nine years old. A year later, Emecheta received a full scholarship to the Methodist Girls School, where she remained until the age of 16 when, in 1960, she married Sylvester Onwordi, a student to whom she had been engaged since she was 11 years old. These were experiences that gave Buchi a wealth of knowledge and would soon make her a renowned African literary matriarch.

Emecheta once described her stories as “stories of the world…[where]… women face the universal problems of poverty and oppression, and the longer they stay, no matter where they have come from originally, the more the problems become identical.”

She has been characterized as “the first successful black woman novelist living in Britain after 1948”.

It has erroneously believed that only northern girls are denied education, but Buchi, through her experience, has written novels which deal largely with the difficult and unequal role of women in both immigrant and African societies, beyond Nigeria.

Buchi was married at age 16 and migrated with her husband to London in 1962.  The problems she encountered in London during the early 1960s provided background for the books that are called her immigrant novels.The young family struggled with poor living conditions to help finance Onwordi’s education. Emecheta worked as a library officer at the British Museum and bore three more children, and at the same time began writing. Sylvester was not supportive of Buchi’s efforts, and was sometimes abusive. She separated from her husband in 1966 when he burned the manuscript to her first book, The Bride Price. According to Emecheta, “I was the typical African woman, I’d done this privately, I wanted him to look at it, approve it and he said he wouldn’t read it. And later he burnt the book … and that was the day I said I’m going to leave this marriage and he said ‘what for, that stupid book’ and I said ‘I just feel you just burn my child’” (BBC website). 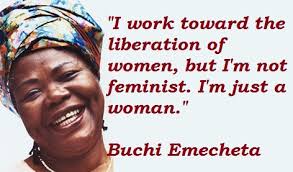 Her first two books In the Ditch (1972) and Second-Class Citizen (1974)—both later included in the single volume Adah’s Story (1983)—introduce Emecheta’s three major themes: the quests for equal treatment, self-confidence, and dignity as a woman. Somewhat different in style, Emecheta’s later novel Gwendolen (1989; also published as The Family) also addresses the issues of immigrant life in Great Britain. Destination Biafra (1982), set during the civil war in Nigeria; The Rape of Shavi (1983), an allegorical account of European colonisation in Africa; Gwendolen (1989), is the story of a young West Indian girl living in London; and Kehinde (1994), about a middle-aged Nigerian wife and mother who returns to Nigeria after living in London for many years. Her latest work of fiction, The New Tribe, was published in 2000.

Emecheta also wrote an autobiography, Head Above Water (1986), and several works of children’s and juvenile fiction.

Buchi Emecheta has received many literary awards. She was a woman who wrote about feminist struggle, but didn’t describe herself as one. In  2005 she got the title-OBE, In 1983 she won the  Best of Young British Novelist and in 1979, Buch got the New Statesman Jock Campbell Award for Commonwealth Writers.