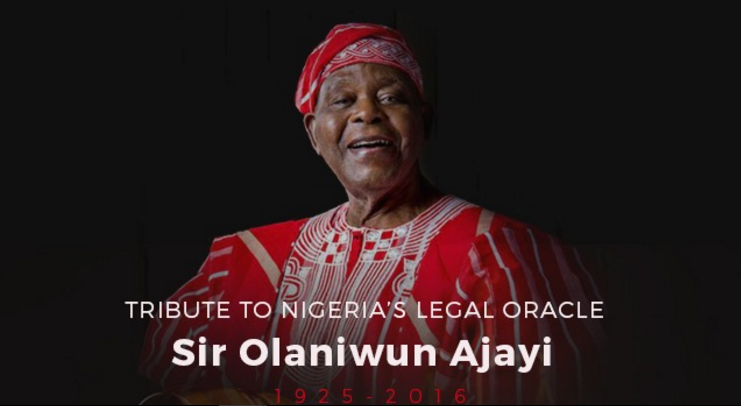 It was Author Laurie Buchanan who said, “Never underestimate the influence you have on others”. My venture into Law was inspired by the outstanding achievements of Sir Olaniwun Ajayi, Nigeria’s legal luminary and political juggernaut. According to Baba, right from his primary school days, he displayed such exceptional brilliance and excellence that the school authority had to engage him as a teacher.

As a young entrepreneur, I call upon all young entrepreneurs to study Baba’s life as a symbol of courage and perseverance. We learnt that for him, getting College education was a battle because of the unavailability of funds. But being the zealous and diligent person that he was, Sir Olaniwun did not allow the inadequacies of his status at that time, deter his dreams and deny his future. In his words; “Before I could complete my primary education, my father sold his cherished Agbada, local gun and a treasured herbal medicine book”. Baba took bold risks, worked harder and with the help of God and his parents, achieved not only his dream of having a college degree, but also became the founder of Nigerian top Law firm – Olaniwun Ajayi LP.

Hire an OlaniwunAjayi and your case is half won. Their attention to detail and dedication in going the extra mile is second to none and this ties in with our core values at Sujimoto.

Success in life is not just about accomplishments; it is about how your life and actions motivate and inspire others to be better. I remember when I first returned to Nigeria, the Ajayis were the first people who supported me and understood my ambition to redefine Luxury real estate in Nigeria. I cannot forget how Sir Olaniwun’s daughter – whom I cherish so much and regard as an Aunt – Dr. Dara’s constant admonition and belief in Sujimoto, helped me and gave me more courage to move on.

A mighty Iroko has no doubt, fallen. But then, ‘Omo ti Ekun babi, Eku ni o jo’ meaning the offspring of a lion must always have the semblance of a lion. This explains why all of the children of Sir Olaniwun Ajayi have taken after him in terms of their resilience and commitment towards achieving their goals, which have made them successes in all of their endeavours.

At a time like this, where Nigerians are going through the most difficult of situations, it is very easy for people to lower their standards and do the unthinkable out of desperation. I advice all Nigerians young and old to emulate the life of Baba and use it as a guide map for the future. The life of Sir Olaniwun is of particularly great significance to me because aside from the fact that we share a similar profession, we also share similar birth date – April 8th.

His astounding leadership qualities and discipline are reflected in the roles he played as the Commissioner for Education and Health in the defunct Western State, as well his position as Chieftain of the Pan Yoruba socio-political group, Afenifere. Baba’s Can-Do characteristics are lessons I have learnt, and qualities that I would like to abide by. According to a close relative of the Ajayis’, one of Sir Olaniwun’s exceptional qualities is that he is a man of his word. Rather than promising and failing, he would never promise, at all.

Sir Olaniwun may have gone to rest, but his astonishing legacies live on. And those us whose lives he has touched in many ways, we will forever bear the torch of his selfless service and struggles for a better Nigeria.

Founder and CEO at SUJIMOTO